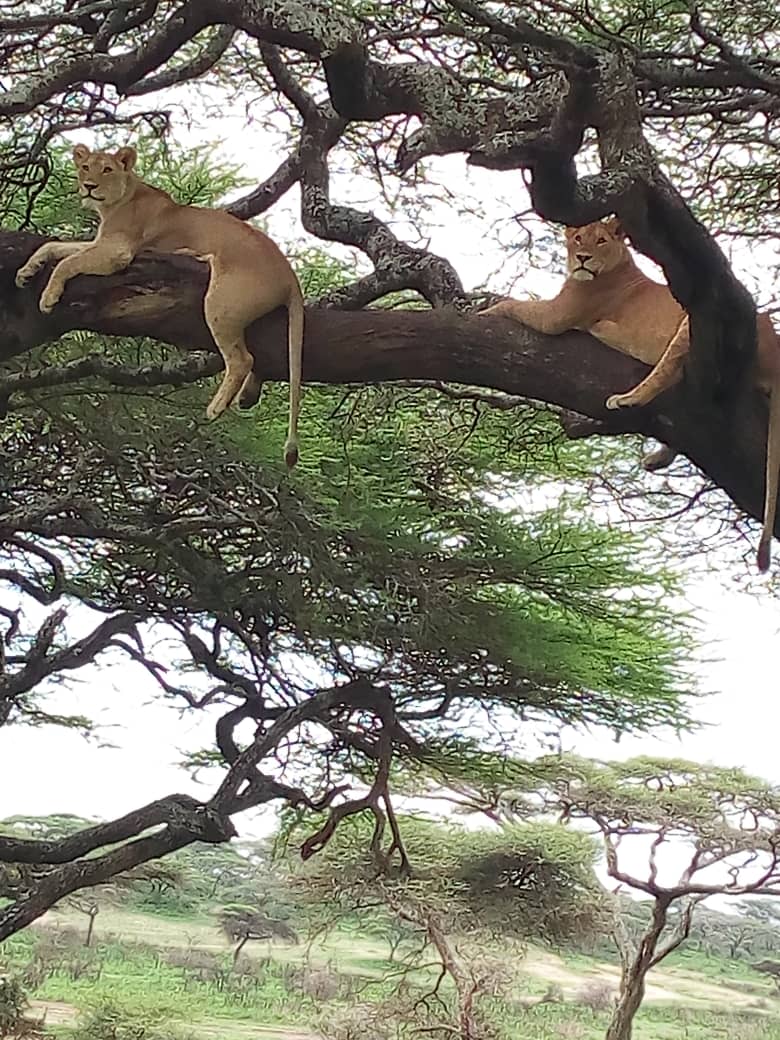 Tucked on the side of the Great Rift Valley, Lake Manyara National Park is one of the smaller parks in Tanzania. It offers spectacular scenery that makes it worth a visit. The park doesn’t have the wildlife diversity of other parks in the northern circuit, though. So, it’s perfect for a day tour as you head for a more comprehensive safari to the Serengeti, Ngorongoro Conservation Area or Tarangire National Park.

Lake Manyara is famous for its tree-climbing lions that undoubtedly will make your trip an exciting experience. The top of the escarpment provides breathtaking views of the lake. A Lake Manyara National Park tour should help you start off your safari on the right note.

The national park measures 325 sq Km, while the lake covers 230 sq. Km. Since the 1920s, the region around L. Manyara provided sports hunting. A game reserve was established in 1957, and in 1960 received national park status. Most of the land is a narrow strip sitting between Lake Manyara to the east and the Gregory Rift wall to the west. It’s part of the Lake Manyara Biosphere Reserve, which UNESCO founded in 1981. Lake Manyara National Park also facilitates the migration of animals to Tarangire National Park, thanks to the Kwa Kunchinja Wildlife Migration Corridor. The park is highly accessible, which is part of its appeal.

Lake Manyara, at an altitude of 960 m, is a shallow alkaline lake appearing as a depression in the Rift Valley. Although it lacks an outflow, it has a number of permanent streams and springs draining the Ngorongoro Highlands and feeding into it.

The lake’s depth is not constant because it changes with the climate. During the dry season, its surface area shrinks due to evaporation. It also dries up entirely in extreme conditions. The lake covers two-thirds of the park when full.

Marshlands, a grassy floodplain and saline flats define the lake’s outer region. The park also features large baobab trees on the slopes around the west side, where the rift wall stands. Dense acacia woodland covers a narrow section of the rift wall. Mahogany and fig trees are present close to the gate, where a tall groundwater forest grows.

The park also boasts more than 600 flowering plants. You will find numerous common species and a few endemic and rare ones. This contrasting vegetation is part of what gives the national park remarkable vistas.

If bird watching is high in your itinerary, then stop by Lake Manyara National Park. The lake attracts thousands of flamingoes in the wet season. Expect to see the Lesser and Greater Flamingo along the lake’s edge. The Great white pelican is another species that frequent the lake. Even though the numbers decreased over the years, the park still provides birding enthusiasts with plenty to see. The area around the groundwater forest is a particularly popular spot for different species. Some birds found in the park include pink-backed pelicans, grey herons, yellow-billed storks, Marabou storks and palm-nut vultures.

Admittedly, you won’t have the same variety as in other nearby parks. Nonetheless, the national park is a decent destination for a simple safari, especially if you are in a hurry. Most of the large mammals found at Lake Manyara are migratory. You can catch zebras, wildebeests, and Grant’s gazelles as they pass head to Tarangire. The park also receives plains game for a short period from the Mto wa Mbu Game Controlled Area.

The dry season attracts a significant wildebeest population, which grazes exclusively on the alkaline grasslands. Other herbivores found in the park are baboons, hippos, elephants, Cape buffaloes, waterbucks and giraffes.

Lake Manyara National Park has a small predator population that includes the black-backed jackal, spotted hyena, bat-eared fox, African civet and leopard. If you are lucky, then you might see a cheetah or African golden cat.

Watch out for black-maned lions climbing trees and perching themselves on branches. The sight is one every wildlife photographer hopes to land. Lake Manyara is one of only two regions where lions with this trait live.

You can tour Lake Manyara National Park all year, but the dry season between July and November is the most opportune. Tourists enjoy undisturbed game viewing during this time due to thinning vegetation. Animals are also easier to spot as they frequent water holes.

For bird watchers, the wet season (November-May) is ideal. Waterbirds are in plenty, allowing you to see more species than during the dry season. Additionally, tourist numbers dwindle during this period, enabling bird watchers more time and space.

Despite its size, Lake Manyara warrants a visit, especially if you want a simple day tour that packs a punch. Contact Explorer Kenya to plan a Lake Manyara National Park safari, while at it, check out the rest of our offerings for the Northern Tanzania circuit.