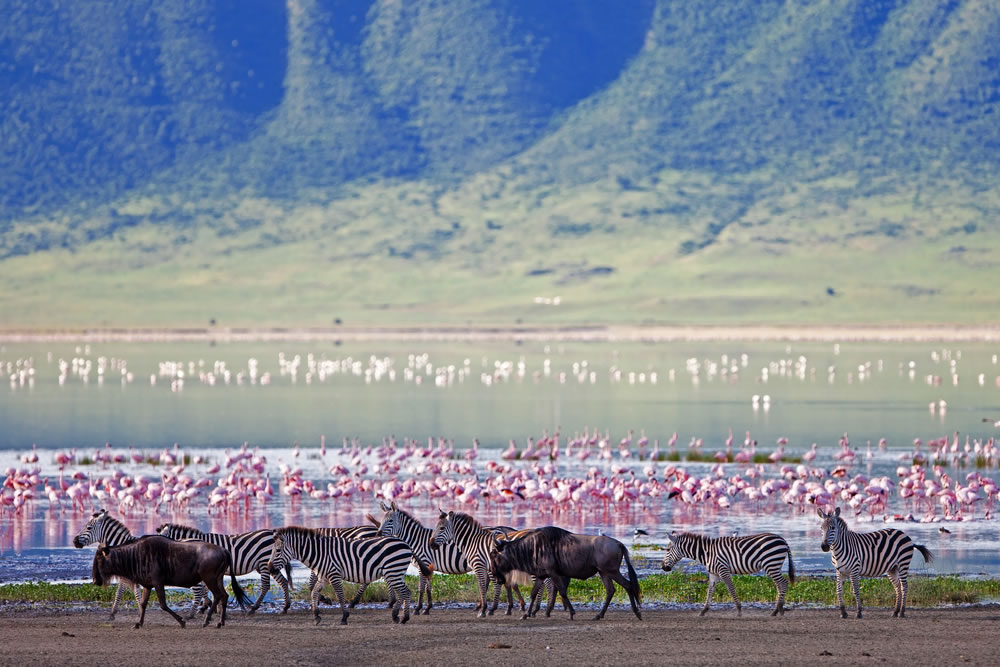 From bird watching to game viewing to photography tours, the Ngorongoro Conservation Area (NGA) is perfect for all kinds of adventures. The region varies in altitude, climate and landforms, affording it different habitats. Its biodiversity is one of the criteria that made the protected area a UNESCO World Heritage Site.

If you are planning a safari and intend to see as many animals as possible, then the Ngorongoro Conservation Area should be at the top of your list. Explorer Kenya can help you put together the ultimate wildlife safari to Ngorongoro. Whether it’s a family trip or a solo adventure, get ready for a magical experience. Why’s that? Because NGA is a must-visit location. This guide explains more.

Located in the Ngorongoro district in northern Tanzania, NGA was established as a single-use area in 1959. It means the region is designed to accommodate the co-existence of animals and humans. The semi-nomadic Maasai have been living in the area and practising pastoralism for centuries. However, human settlement and subsistence farming are limited according to the Ngorongoro Wildlife Conservation Act of 2009.

NGA was initially part of the Serengeti National Park. However, it became necessary to split a section from the park due to tensions caused by the displaced communities. Moving the people living in what was the national park to the conservation unit ensured they could continue with sustainable economic activities. Controlled land use reduces the effects humans have on wildlife. Authorities also ensure the human population stays within the allowed capacity in the reserve.

NGA has distinct habitats that are part of its contribution to the Serengeti ecosystem. The region goes from highland catchment forests to short grasslands; montane long grass plains to savannah woodlands. It prides itself on offering largely undisturbed lands, hence maintaining the integrity of the ecosystem.

The Ngorongoro Conservation Area connects to the Serengeti National Park and the rest of the ecosystem through functioning corridors to facilitate the Great Migration.

For many people, the name Ngorongoro is synonymous with the famous volcanic caldera. The Ngorongoro Crater is breathtaking, with a gorgeous landscape that earned it a spot on the list of the natural wonders on the planet. Besides its prolific wildlife, the crater has enchanting vistas.

With a floor covering 260 sq. Km and 600 m deep, the crater is the world’s biggest, unfilled, inactive volcanic caldera. It resulted from a volcano forming and, later collapsing, approximately two to three million years ago. In 2013, it was voted one of Africa’s Seven Natural Wonders.

The Ngorongoro, Empakaai and Olmoti craters form part of the eastern Rift Valley. In Olmoti, the Munge Stream, which is the primary water source, drains the crater to the north into the seasonal Magadi salt lake. Another stream, Lerai, empties the crater to the south, feeding into Lerai Forest and Lake Magadi during heavy rains. Ngorongoro also gets water from Ngoitokitok Spring, located on the crater’s eastern wall. A huge swamp next to the spring attracts a variety of animals. The crater floor has several small springs that serve as water sources for animals and humans, particularly during drought periods.

Communities living in the region grazed livestock within the crater, but the activity has since been prohibited.

Wildlife in the Ngorongoro

It’s not for nothing this protected area is the premier game viewing destination in Tanzania, and perhaps, Africa. NGA hosts various animal species, ensuring visitors experience the region’s diversity. Most of the wildlife, mainly consisting of ungulates, lives inside Ngorongoro Crater. It has a sizeable population of the blue wildebeest, Grant’s zebra, Thomson’s gazelle, eland and waterbuck. Since it’s part of the Serengeti ecosystem, the region sees over a million wildebeests pass through here during the annual migration.

Some of the large mammals you can see here include Cape buffaloes and hippos. The crater is also one of a few places in the world where you can see the endangered black rhino. It provides habitats for several other globally threatened species.

If you are hoping for elephant sightings, look around the Gorigor Swamp, where the large mammals with their massive tusks graze. The crater has one of the densest lion populations. You can catch several prowling along the plains. Other big cats, including leopards, are present in the crater.

Visitors can also view game outside of the crater. The area around Ndutu Lake, west of the conservation unit, offers an impressive population of lions and cheetahs. Other animals found in the region include African wild dogs, spotted hyenas, hartebeests and jackals.

You can’t say to have experienced a complete NGA tour without seeing the Oldupai and Olduvai Gorges. The two sites are why the region is called ‘the cradle of humanity.’ They are the locations where archaeologists discovered the earliest known human species specimens. Olduvai Gorge stretches for 50 km along the eastern Serengeti Plains. It’s a steep-sided ravine resting in the rain shadows of the Ngorongoro highlands.

The gorge is considered one of the world’s most significant prehistoric sites and, thus, has been the subject of extensive research. It is expected the area could reveal more evidence of human evolution. If you appreciate archaeology, then Oldupai and Olduvai Gorges should be on your itinerary.

Games drives are some of the most popular activities in the Ngorongoro Conservation Area. They allow visitors to see the different animals from various spots in the reserve. However, you can also take safari walks in some sections of the conservation unit. Walks are perfect for photography tours because you can enjoy awe-striking panoramas from different vantage points.

If you intend to take in the captivating landscapes at a leisurely pace, then a picnic is an excellent idea. You can arrange to eat in the plains while drinking in a glorious sunrise or sunset.

Camping is another way to experience NGA. The area has campsites where guests can set up and marvel at the beauty of the conservation unit at night. Watch predators in their element and see what else the region has to offer under the cover of night. If you are planning a backpacking trip, then consider camping in Ngorongoro.

June to October and December to January, the dry season, is ideal for touring the Ngorongoro Conservation Area. During this time, wildlife is easy to spot because the vegetation is not dense. Animals also frequent water holes, providing uninterrupted sightings and perfect photo opportunities.

You would never run out of things to do in The Ngorongoro Conservation Area, making it a safari destination worth your time and money. Let us give you the experience of a lifetime by planning your NGA safari tour, whatever your preferences.