The Great Migration defines the Serengeti National Park. As the location of the world’s greatest natural spectacle, Tanzania’s oldest national park is a dream safari destination. Every year, thousands of tourists flock to the country to witness millions of wildlife leave in search of pasture and water. As magical as this phenomenon is, the park offers so much more.

In the Maasai language, ‘Serengeti’ loosely translates to ‘never-ending plains,’ and they truly are. The park, located in northern Tanzania, stretches across 14,763 sq Km of short, open grasslands. It boasts over 1.5 m hectares of virgin savannah. Different kinds of animals roam the plains that go as far as the eyes can see. The honey-coloured horizons, untouched wilderness and natural wonders set the stage for the perfect adventure safari.

About the Serengeti National Reserve

Serengeti’s history goes back several centuries, even before European exploration. In 1930 a game reserve covering 2,286 sq km was established in what is presently eastern and southern Serengeti. It was a sport hunting region until 1937. It received Protected Area Status in 1940 and officially became a national park in 1951 after the finalisation of the park’s boundaries. A board of trustees was put in place to oversee the park’s administration.

Originally, Serengeti National Park included the Ngorongoro Conservation Area. In 1959, 8,300 sq Km was cut off from the park’s eastern section to provide a multiple land use area for the Masaai, creating the conservation unit. In 1965, after the establishment of the Masai Mara National Reserve in Kenya, the Lamai Wedge was created, linking the Mara River and Kenyan border. It became part of the Serengeti National Park and formed a permanent corridor for the wildebeest migration.

The national park is part of the larger Serengeti ecosystem, which consists of the regions where the annual migration occurs. It includes the Masai Mara National Reserve to the north; Loliondo Game Controlled Area to the west; Maswa Game Reserve to the south; Grumeti and Ikorongo Game Reserves to the east. The Mara River is the only perennially-flowing river that serves the ecosystem.

The Serengeti National Park has a highly productive ecosystem and impressive biological diversity, making it one of the first places to be considered for a UNESCO World Heritage Site classification at the Stockholm Conference in 1972. It received the status in 1981. The park is also a Biosphere Reserve.

The Serengeti ecosystem facilitates the longest overland migration in the world, covering a route of about 800 Km. Each year, approximately 1.5 million wildebeests and several hundred thousand zebras, gazelles and common elands move north, to Kenya’s Masai Mara, to look for permanent water holes and pasture. The migration is cyclical, with animals moving between Tanzania and Kenya throughout the year.

It all begins in March when herds move to central Serengeti, then pass through the Western Corridor in April and May. During the crossing, the animals have to get through the Grumeti and Mara Rivers, which are infested with more than 3,000 crocodiles. Once the dry season ends in October, herds make their way back to the Serengeti National Park.

Seeing the Great Migration in person is the only way to understand all the fuss. You wouldn’t have enough words for the awe-inspiring scenes that unfold. Imagine a cloud of dust materialising on the horizon, with hooves thumping so hard, your body shakes. Or the sight of crocodiles lying in wait to pounce on the weakest of the bunch as herds splash through muddy water. Watching lions, leopards and cheetahs hunt the migrating mammals is a view like no other.

Wildlife rules the Serengeti. It’s one of the best destinations to view game. It offers an astounding variety of animals, but the most attractive feature is the ability to drive for kilometres in a 4×4 across the sprawling plains. Visitors don’t have to struggle for vantage points for incredible sightings. The area also features granite formations called kopjes that make great observation spots.

The national park harbours a long list of animals from different species. As you might have guessed, wildebeests make up the largest population. An array of large and small animals contributes to the biodiverse environment. They include hartebeests, elands, topis, antelopes, hippopotamuses, warthogs, giraffes and buffaloes.

The park is also famous for hosting the most prominent predator-prey interactions globally. Wild dogs, lions, cheetahs, spotted hyenas and leopards are some of the top predators you can see here.

Apart from game viewing, the Serengeti National Park is a treasure trove for bird watchers. Over 500 species await your discovery. The park houses the highest ostrich population in the country. Some other species you can expect to find in this park are the red-billed buffalo weaver, kori bustard, Africa fish eagle, pink-backed pelican and black heron. If you are fortunate, you could spot at least one of the regionally endemic species, like the Tanzanian red-billed hornbill.

For tourists who love culture, Serengeti provides a rich heritage to dive into. The region has an interesting and long history of human occupation. You will encounter the Masaai, the most recognised tribe from the Serengeti. As you interact with them, learn about their norms and cultural practices, which keep attracting attention worldwide. The national park is also home to several indigenous tribes.

The Best Time to Visit

What you want to get out of your safari determines the best times to schedule a trip to the Serengeti. The park and the entire region is magnificent all year, with something exciting in store for everyone.

June through August is peak migration season. So, if your itinerary includes the greatest show on earth, then this is the ideal time. However, the specific location you intend to visit matters. Note that this period is the busiest in the national park. In November and December, catch the mighty herds as they return to Serengeti.

If you wish to see wildebeests calving, then plan your travel between January and March. During this time, witness the birthing process and young ones learning to feed. You also get to see predators hunting the young.

The perfect Serengeti safari is different for everyone. Therefore, define your needs and explain them to us for a well-structured tour.

The Great Migration is the stuff of thrilling NatGeo documentaries, but nothing beats experiencing it firsthand. So, book your Serengeti National Park safari now. Visit the Serengeti for a whole lot more all year round. 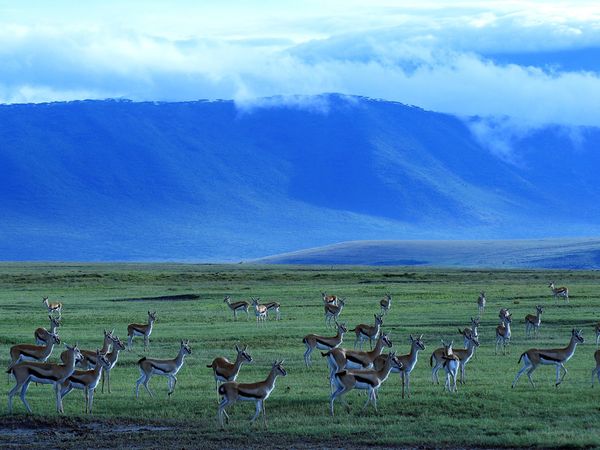