“The seventh greatest wonder in the world.” It is now officially known throughout the world. Many have come back time and again. They have witnessed this mass movement of wild animals roaming free through the unspoiled and savage wilderness. The air fills with the click-click of the cameras. You have not seen something like this before.

Africa is changing at a quick pace, and human encroachment into the wildlife reserves has continued to erase the traditional migration routes. In association with the development and changes in the way of life, the image of wildlife roaming free is slowly getting deleted. Fortunately, Masai Mara National reserve holds on to its charisma of open, limitless land. It is one of the places in Africa that still prides on wildlife concentration.

Masai Mara is located in the southwestern of Kenya, 290 kilometers from Nairobi. The abundance of wildlife and the remoteness of the reserve implants memories that no money can buy.

Migration is a recent phenomenon (the ’60s and ’70s was the biggest boom) with about 250,000
Individuals. Gradually, with time the number has risen to the current population of over 3,000,000
Individuals. Add to it an estimated 1,500,000 Zebras, and the result is one of the most magnificent scenes in the world. The massive display attracts hundreds of big cats as the populations provide abundant prey. The giant African crocodiles lie in wait, patiently, as the big herds come to cross the river or to drink.

It is the Masai community who are not so pleased with the whole phenomenon. The wildebeests compete with their vast herds of Boran cattle for the grasslands. To them, it is a big calamity especially because the wildebeests transmit diseases to their flocks and poison the waters with their fetal sacs.

This world-famous migration is a circle of life which, in simple terms, means that there isn’t a
start or an end. Only where the herds are located at a particular time. The significant determinant is the
availability of pastures. The plains of Ngorongoro Conservation Area in Serengeti are a favored spot as grass abounds and the wildebeest find a safe place to graze. It is also here that over 500,000 new calves are born and the nearby waiting Jackals or Hyenas take many.

Newborns have little time to strengthen their legs. As soon after birth, the “pilgrim” continues. By April, the rains are over in southern Serengeti, and the plains have dried up. The vast herds then
gather and face the long march northwards and westwards. The natural lawnmowers abandon
the exhausted grasslands of southern Serengeti to head for the already tall grass of the Western
corridor, near the shores of Lake Victoria.

The pioneers of the migration movement are the majestic herds of zebras. They prefer the long
stems of the coarse grass. This way, they leave behind shorter grass which is favored by the wildebeests.

In late June to July, the mass starts pouring into the Kenya Masai Mara reserve where fresh, tender
and mineral-rich grass is already waiting. Here they meet the resident Mara populations which
add up to about 150,000. Also commonly referred to as the Loita plains herds, they spend most of the season northeast of the Mara. When it gets dry, they pour into the interior of the Mara in search of greener pastures.

The migrating herds spend roughly 3 to 31/2 months in the Mara crossing through Sand River, which is a tributary of the Mara along the boundary of Kenya and Tanzania. They trek westwards and cross the Mara river and sometimes the Talek river. Usually, around this time heavy rains on the Mau Escarpment (origin of Mara River) fill the Mara river to the brim.

This is a good time to watch the trunk-looking Crocodiles, while they await the forthcoming feast.
Finally, the gnus (wildebeests) venture into the river. This gregarious coordinated behavior of the herds usually teamed with zebras, creates an incredible scene. Just what the cameras have been waiting for.

They wander along the river looking for a convenient crossing point. This is a moment
filled with tension for both the gnus(wildebeests) and the audience. The survey for a less steep and with no obvious danger. Finally, one takes courage and plunges into the river, and magically the rest falls onto the footsteps and in one organized line crosses the river.

In addition to the crocodiles, accidents also occur. The river’s current can be too strong for some especially the young ones. Or simply getting stuck between the rocks in the river and breaking limbs, a direct ticket to the jaws of the giant crocodiles. Finally, the crossing is done, and the trek to their unknown (or known)destiny continues.

Maasai Mara Serengeti wildebeest migration safari in the month of October, they are already heading to Serengeti where the rains have treated the southern grasslands to a lush, green carpet of rich grass. Once again, they are heading to the southern plains, where a new generation will be born to start the cycle of life all over again.

Morning and afternoon game drives in the finest game sanctuary in Kenya, noted for its wildebeest migration, lions and other wildlife. MARA SERENA LODGE.

Full day in Maasai Mara with a morning and afternoon game drive. All meals and overnight at MARA SERENA LODGE

Have an early morning game drive, breakfast then depart for Nairobi arriving in the late afternoon where your safari ends.

Balloon Safari at $425 per person

-All park entrance fees
-Accommodation at Mara Serena Lodge on full board.
-1 liter per person per day bottled water for use during the safari
-Services of an English speaking experienced driver/guide
-Transport in a 4 x 4 Safari Land cruiser with pop up roof for easier game viewing and photography. Exclusive use of safari vehicle throughout the duration of the trip
– Meals as in itinerary
– All government taxes and levies
– Flying doctors air ambulance evacuation in case of a life-threatening accident or injury
– Safari accessories (First Aid kit, cool box and fire extinguisher) Emergency number 24 hours. All safari vehicles are equipped with RF radio. 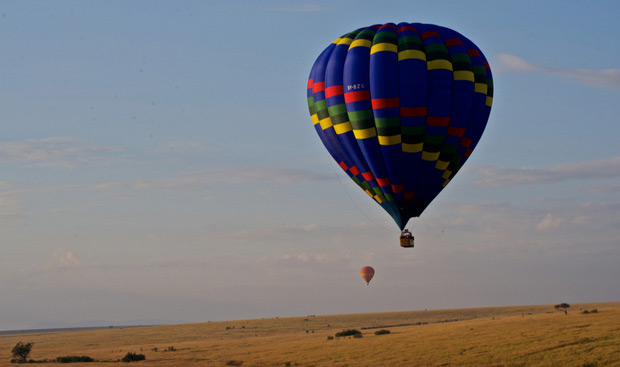